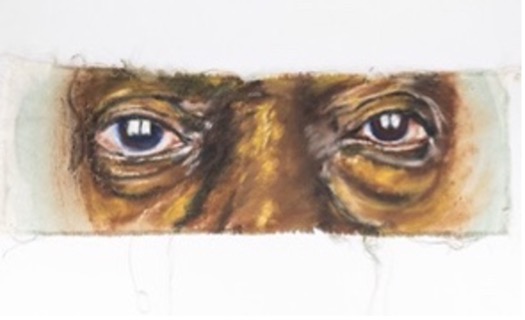 Over the twenty-two year history of Homewood Studios we have presented many noteworthy shows in gallery. Our 2011 show, From My Altitude, for example, by the then unfairly incarcerated member of the Cuban 5, Antonio Guerrero, a beloved poet in his native Cuba, was in a federal prison  in Colorado where he began painting. He is one of five men arrested, accused and convicted of committing espionage on the United States government in 2001.Their story became a cause celebre in many circles and positions on the 5’s innocence or guilt vary wildly depending upon one’s political views. President Obama finally released these men in 2014, in large part due the willingness of small galleries around the country to exhibit and discuss Guerrero’s evocative paintings of his prison life and memories of his life in Cuba.

More recently, Seitu Ken Jones’ January show, Real Positions, strikes a similar note of connection between art and social justice. Jones’ large self-portraits place him in the unjust and undeserved settings that Black men have found themselves in throughout the four hundred years of struggle for equality and acceptance in our country. In the words of Davu Seru, local jazz musician and visiting lecturer in English literature at Hamline University, “…the recent exhibition at Homewood Studios asks the viewer to become witness to complaint: to consider Black mortality and justice, masks and roots, history and perspective.” Davu’s review of the show for MnArtists is abundantly peppered with photographs of work from the show, and it takes his readers through a virtual visit to the gallery, complete with questions of the artist and his personal glosses on the answers offered by Seitu.