The vision for Homewood Studios has its roots in the late sixties and early seventies, in a North Minneapolis neighborhood called Homewood. At that time several young families, all committed to values of diversity, social justice and community activism, began buying homes here. The neighborhood had been depressed, many of the homes were dilapidated or abandoned, but they were built in the early part of this century and were big, well-made, elegantly designed structures, and they were relatively inexpensive because of the reputation of the area. These teachers, attorneys, architects and artists, professional people and their families, were not particularly interested in the American Dream of the suburbs an earlier generation had pursued but rather were inclined to create a vital and nurturing community in an urban landscape.

The earlier history of this neighborhood includes a period around 1908 to 1920 when Jewish and African-American people were excluded by covenant from purchasing homes in this development. Stone markers were erected at the corners of this eighty-acre plot of land to indicate its exclusivity. In short, Homewood was an early version of the gated community. Because these large and beautiful homes were “out in the country” back then, not many of the targeted wealthy Scandinavian merchants responded by purchasing homes here. The covenant against Jewish people was lifted and the homes sold well until the development was full. The neighborhood remained predominantly Jewish in nature and culture well into the fifties and early sixties. During this time a bustling business district, including the Homewood Theater, the Homewood Market, the Homewood Hospital and the Homewood Bowling Alley thrived. North High School was one of the centers of social and cultural activity and produced graduates such as Harrison Salisbury (Pulitzer prize winning author) and the Andrews Sisters.

Then, in the early sixties, the lure of the suburbs attracted many of the Homewood residents and a general exodus occurred, producing the pattern of events familiar in large cities around the country. Homes that had been in families for generations were put up for rent. Less stable populations of residents moved in and out much more frequently. City and community resources were diverted to other areas. What was once one of the more affluent and desirable areas of the city sank into disrepute and disrepair.

Thirty years later, our neighborhood in the heart of a major city, began to give birth to a new definition of the American Dream. This renaissance, fueled by the counterculture values of the sixties which have remained largely intact here, has taken on several projects – including the restoration of the stone markers, now dedicated to inclusivity rather than to exclusivity – and have most recently embarked on an ambitions commercial/economic development plan for four blocks along our “main” street – Plymouth Avenue.

Homewood Studios is the first of these restoration projects. A wonderful old brick building, abandoned in the late eighties, has been renovated and turned into five work space studios for community artists and a community gallery/meeting place. A back yard sculpture and flower garden provides a place for community residents and studio artists to meet informally, for local children to get to know the artists. Right next door, another old building has undergone a similar process and has become Plymouth Avenue Art Studio, owned by local jeweler and sculptor (as well as elementary school art teacher) Shirley Jones. Other initiatives currently include eight live-work spaces for artists and plans to convert the old Lutheran church / synagogue / Baptist church across the street into a dual museum—housing artifacts of local Jewish history and a museum of civil rights.

Asian Media Access, a non-profit dedicated to teaching teens how to use video and audio documentary techniques to address social issues, purchased the old Salvation Army building on the block and renovations are under way.

All of these plans, visions and activities grow out of the dreams and desires of our neighbors, (many of whom have lived here now for thirty-five or forty years), for our little corner of the planet to be regarded as a safe, creative, desirable and healthy place to live and work and grow. All of the plans for change and development are neighborhood driven, with city agencies becoming willing and excited partners as the process has entered funding and building phases.

Since opening in December 1999, Homewood Studios has averaged twelve to fifteen gallery shows a year, focusing on the work of local artists, including African-American and Hmong artists.  In 2007 Gallery 1x1xOne, a space dedicated to children’s art was opened. 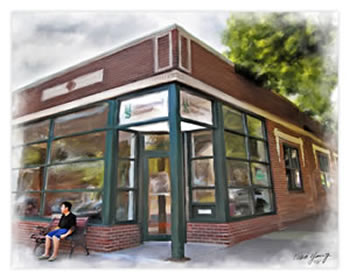 Other Information About Homewood Studios

Delivered to the City Planning Commission on Tuesday, January 20, 1998 during our zoning hearing.

I have been a resident of Homewood, in North Minneapolis, since the fall of 1970. I have been a teacher of English and writing at North Community High School, ten blocks from my home, since 1974. During all this time I have been developing as an artist, poet and printer, and have viewed all these activities as “my work.”

My family life, my teaching life and my artistic life are all bound irrevocably to my neighborhood, Homewood, which has a diverse and interesting history and which has undergone considerable change for the better since I first moved in. I live two blocks from the building I want to purchase and develop as Homewood Studios.

I view art as a primary way to build community and to enhance my neighborhood. A plethora of accomplished artists of all kinds are my neighbors, and we have no gathering place, no venue where our collective energies can coalesce, no place where one plus one might begin to equal three.

It is my hope to create a nexus point in my neighborhood where art and artists, friends and neighbors, students and teachers, children and adults can find nurture and where they might fulfill themselves and their community.

I view this building, 2400 Plymouth Avenue, as an addition to my home, as an extension of my classroom. And I view this enterprise, the opening of Homewood Studios, as the first step in revitalizing an entire commercial block, and thereby the aspirations and nascent visions of our entire community.