This might be a good place to introduce this collection. 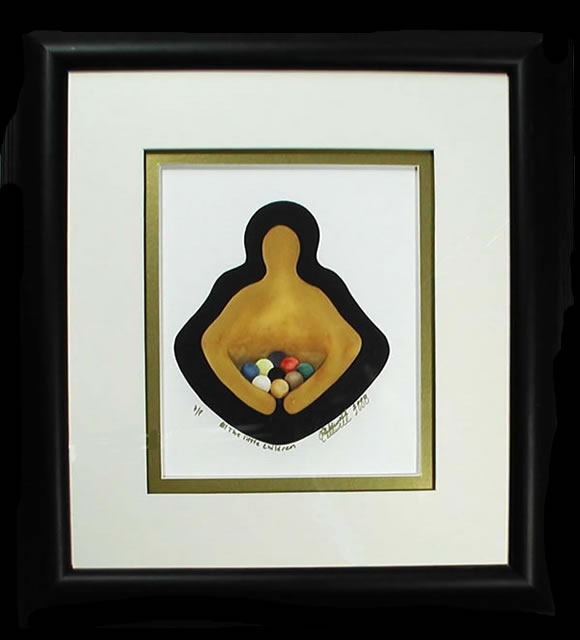 ARTIST’S STATEMENT: This framed print was given as a retirement appreciation gift from the artist to George Roberts, who taught several members of his family over the years. This work of art was inspired by a series of thoughts included in four experiments with shape and form that became one in unity. All The Little Children symbolizes the colors of our society culturally, with the nurturing of a mother and the boundaries and security of a father. 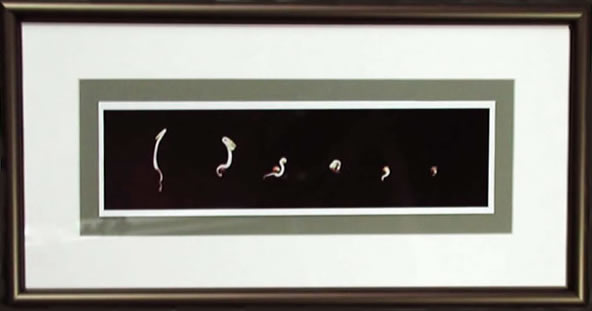 ARTIST’S STATEMENT: Vates Collard Green Seedlings at 10 Days is part of an ongoing series of botanical images. I have been germinating seeds and culling them. The culled seeds are then scanned to produce these images, metaphors for growth and change. 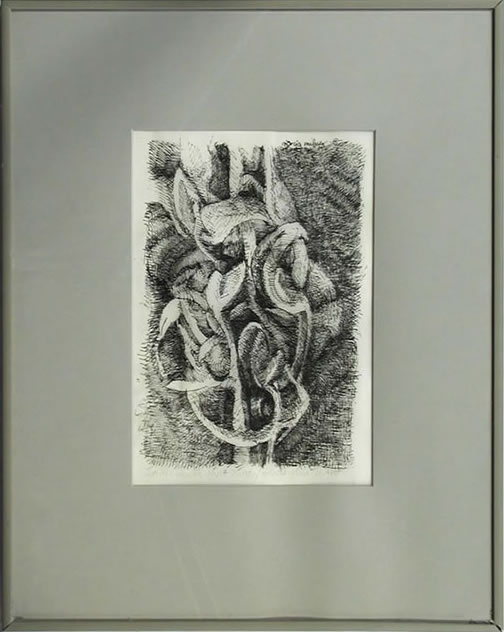 PC003 – for the flower that exists / inside / Marcia Milner 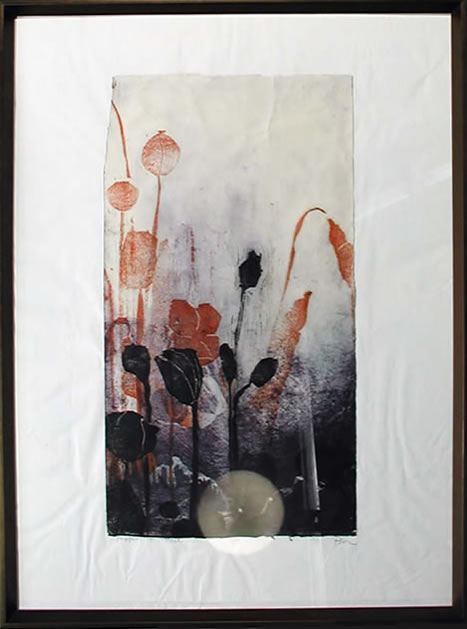 Poppies in Mist was purchased after the very successful 12 Hmong Artists show at Homewood Studios in July, 2007 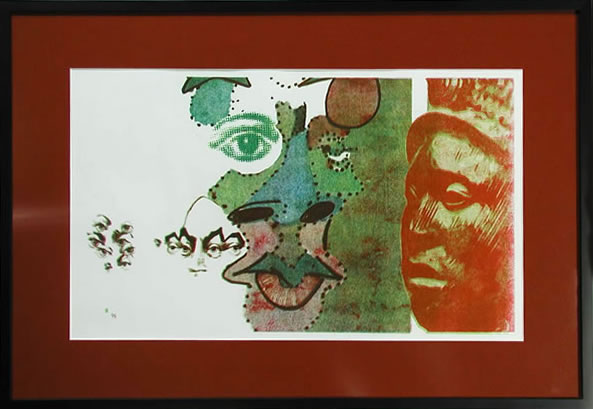 Ernest Bryant, A North Community High School graduate, has remained a Northsider. He continues to affect and influence the art scene in his community. 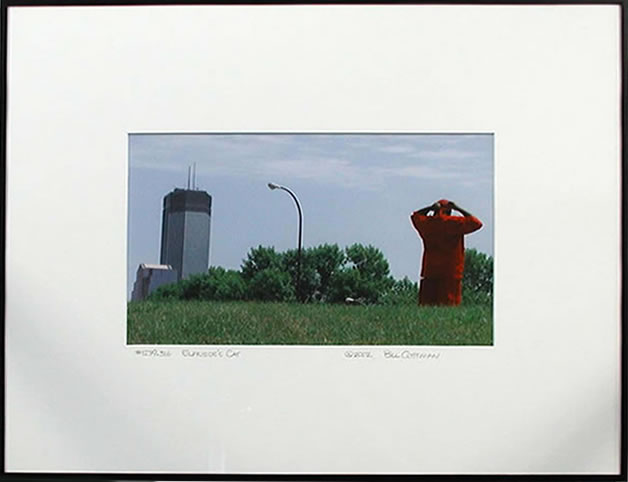 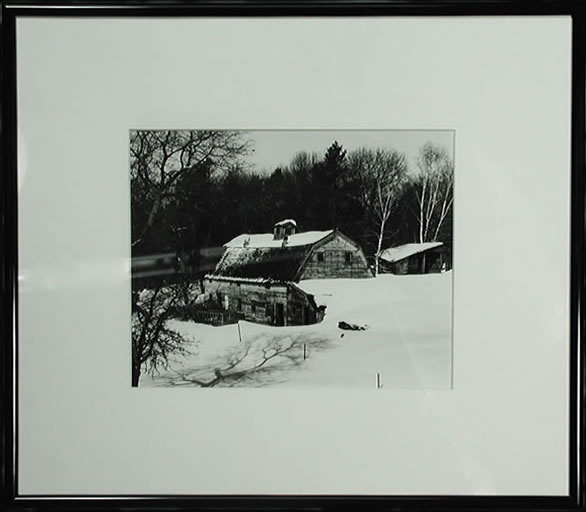 ARTIST’S STATEMENT: This barn was something I had driven by for years and never noticed until I drove by during the winter. I’m not sure if the starkness of the trees in winter made it more visible. I remember seeing the brightness of the snow and the dark openings into the barn. 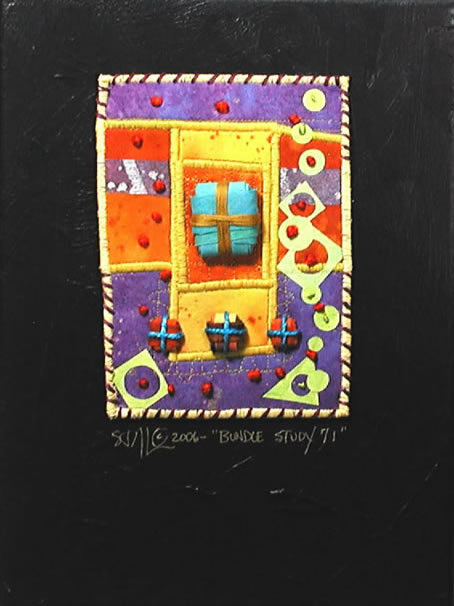 ARTIST’S STATEMENT: I can tell you this… I’m an artist, specifically a painter who paints on fabric and then likes to sew it up into something. It has been said good things come in small packages, and my bundles are joyful little packages of inspiration and visual delight. They possess glorious energy derived from both serendipity and purposefulness. They have been created from painted scrap fabrics that would normally have been thrown away, but their innate beauty wouldn’t let me toss them out. Instead, I wound the scarps around themselves into bundles with the potential to burst forward into the world, delivering a giant dose of well-deserved eye candy for everyone.

Judy is a long-time friend of Homewood Studios. She has taught classes and workshops here in color theory and low-tech printing techniques. She is a wonderful print maker with a long history of excellence in her art and in teaching. 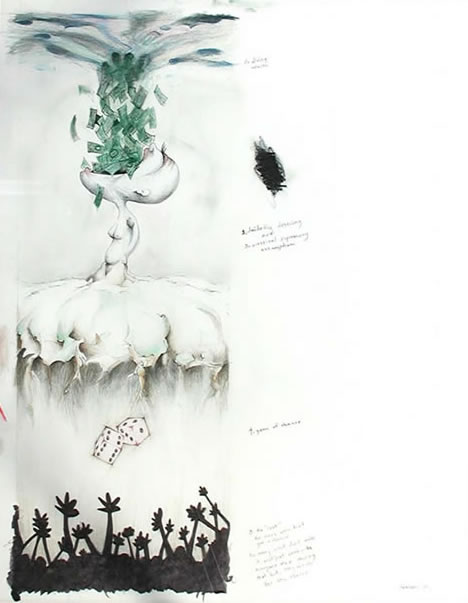 For about three years, from 2001 to 2004, Maarja was resident artist in studio B at Homewood Studios. Like her work, her presence brought color and insight into our midst.

Brad was my student at North Community High School when he donated this drawing. He turned up in my 9th grade English class one day, seeming well beyond his years in maturity and insight. He was actually a senior making up credit for an error in judgment in his freshman year. That was in 1994. More recently, he brought is French wife and beautiful child to the gallery for a visit. They were on their way to the French countryside where Brad was going to focus on his painting. That was in 2005. 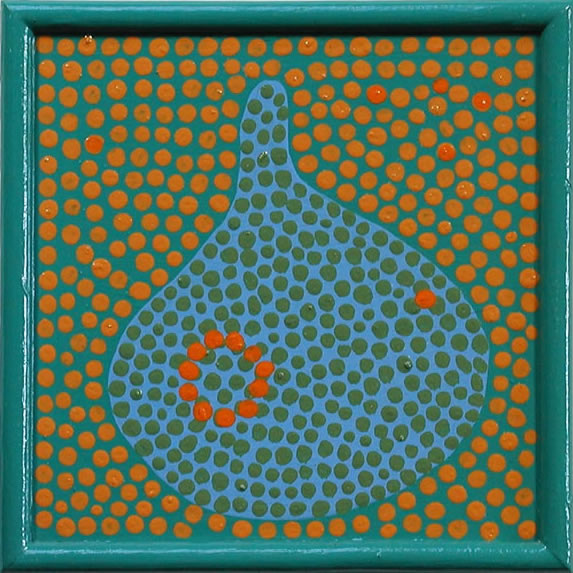 We first saw this piece, and many others in the same style, when Mary was invited by Connie Beckers to join her in their August 2003 Homewood Studios show. At that time we bought a stool also painted in the same style. After the show, Mary was going to throw all the paintings away, but gave them to Connie instead. At Connie’s Holiday show at her home, we saw this piece and bought it for the permanent collection. 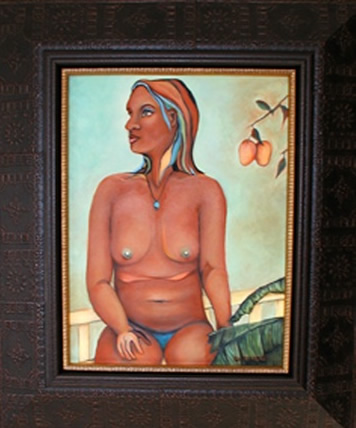 I have the good fortune of being a part of a weekly figurative co-op. We have many terrific models and a really gifted group of artists. Sometimes the planes of the body appear to me as a series of geometric shapes; and, in the process, a personality appears. “Lourdes” is a woman of the Caribbean. She is strong and knows who she is. I was born on the island of Cuba. The colors of the water, the sky, and the food have always crept in to my work. Sometimes mangoes do too. 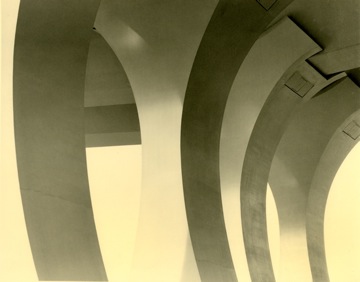 PC017 – AFTER THE FALL / Steve Zimmerman

This was photo was done on a -15 degree morning in January 2009. Since I have many images of the 35w bridge before the fall, I wanted to capture an image of I-35 W after it fell. This is a place where I used to fish when I was a young lad. It is a special place to me. When I am in the country I can mediate by laying on my back in the glacial prairie hills of west central Minnesota, when I am in the city, the river is the place of solace &amp; and refuge from the daily grind. I still go there to fish, write music and take photographs. 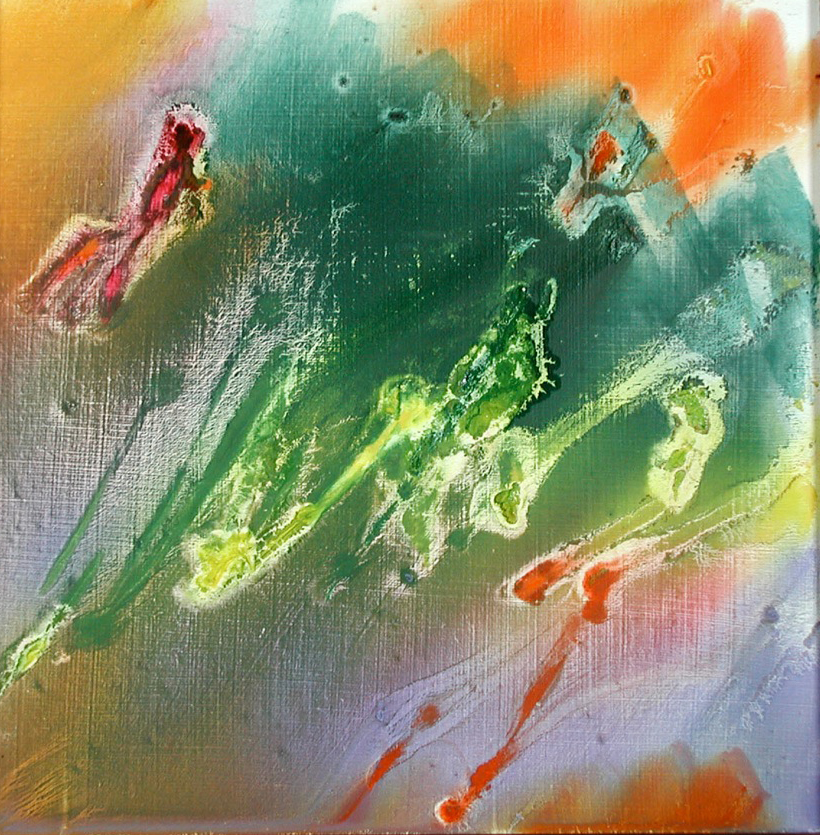 Mieko has been a resident artist at Homewood S tudios since July 2008. She works in oils using a unique process she has developed which gives her work an inviting â€œunderwaterâ€ feeling. In the early spring of 2010, we learned of the unexpected and tragic death of Jennifer, a bright young girl in the family our son, Andrew, had lived with a few years earlier while a Peace Corps Volunteer is Dwinjama, Ghana. Mieko, a good friend, wanted to do something for Jenniferâ€™s family. She painted this piece, a copy of which was taken to the family by an artist friend who was going to visit Dwinjama. The original remains on our permanent collection, our reminder of the young woman of so much promise whose light was extinguished far too early but whose dream continues. 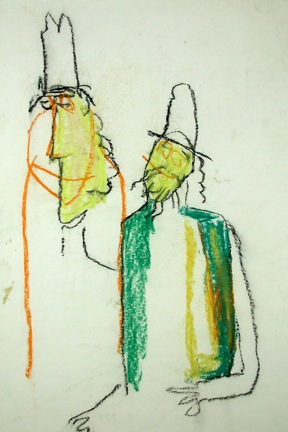 Andy was a student at Stillwater High School when I was an intern English teacher there in 1969-70. I spent most of my free time in the art lab and there I met Andy who seemed to have a natural talent for art, for knowing what he was doing with his materials in a way I had never witnessed before. On the day I watched him make this drawing I allowed I admired his facility and his vision. He handed the drawling to me without a word and continued with whatever came next in his mind. 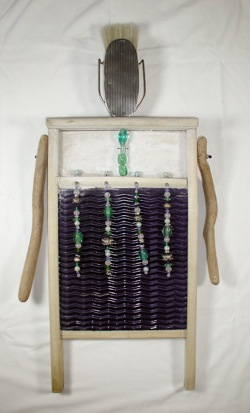 The moment I saw the old washboard a local thrift store, I could envision the beginnings of a doll. The pieces finally came together during the lift of creative energy brought to me during the show of my work at Homewood Studios in February 2009. The driftwood collected long ago on a sandy beach, the antique horsehair brush left to me among my grandmother’s belongings, the potato masher snatched up at an estate sale, the bubble-like beads gathered over time, and the shiny metal lid of a modern treasure come together in the spirit of "board wash." 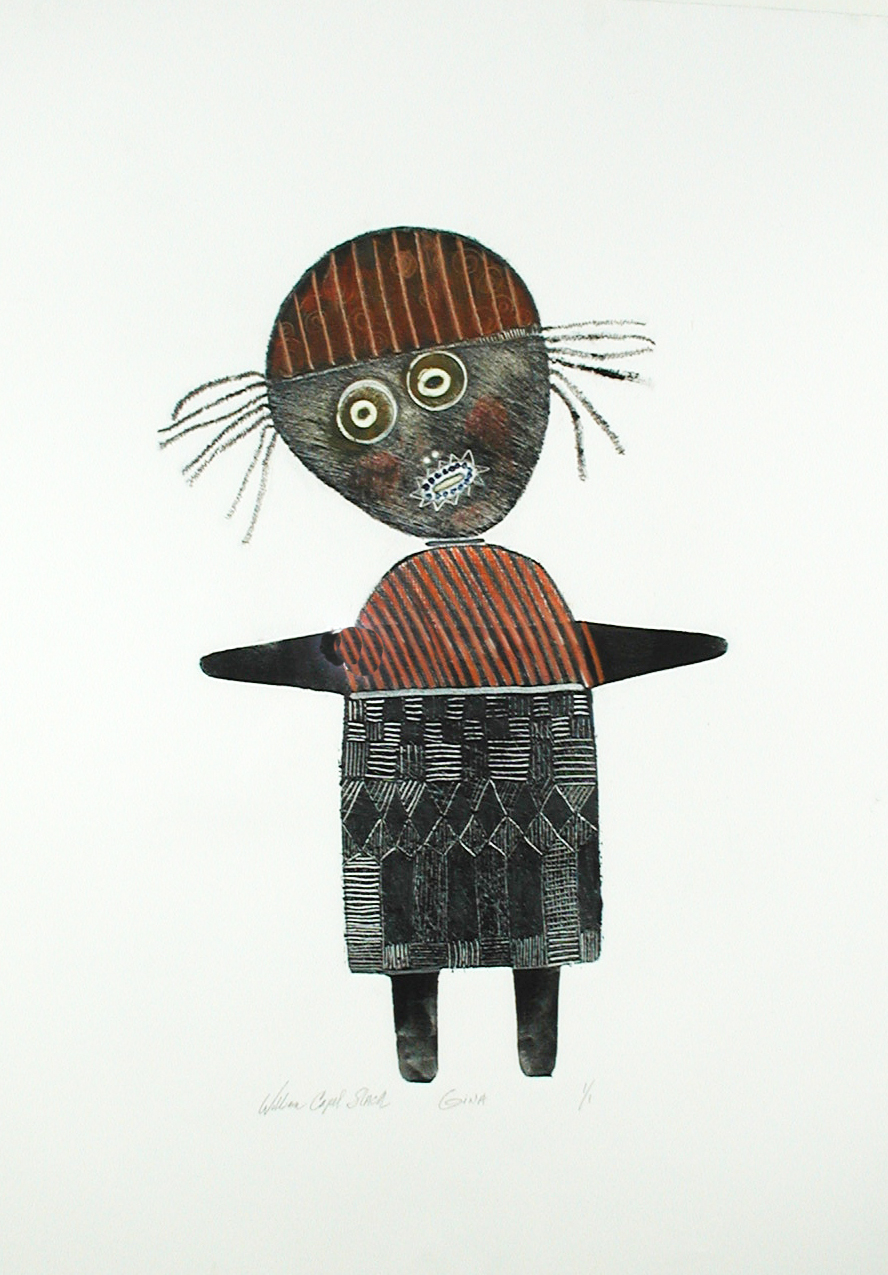 From his show 2004 Homewood Studios show, Embracing My Own Voodoo. Bill spoke of his research into Voodoo, which stems from an African word for spirit, into the roots of his own spirit in African history and in his own psyche resulting in the discovery of several warriors (male images) and protectors (female images) in his work. He also answered questions about his method – spending hours on a single place, laying down layers and layers of paint, before running the print through the press all in one pass. 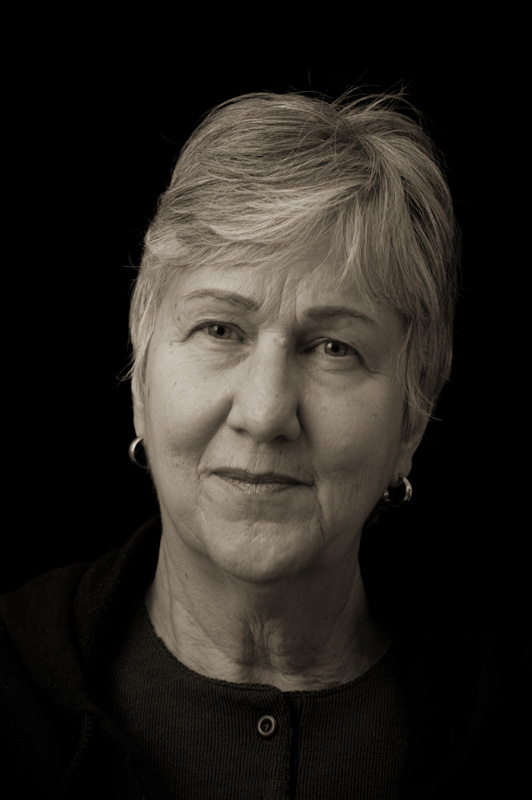 Throughout 2010, I made one photograph each day about the relationship between living a creative/artistic life and a maternal life. The images became a study of my relationship with my self, my spouse and my children. The vulnerability that comes from using my own life and family as a backdrop is essential to making photographs that become less about the individual experience and more about the universal questions of role, relationship and identity. Toward the end of the year I wanted to include images of other mothers as a way of saying there are other faces and experiences of motherhood. "Beverly" is one of those mothers. 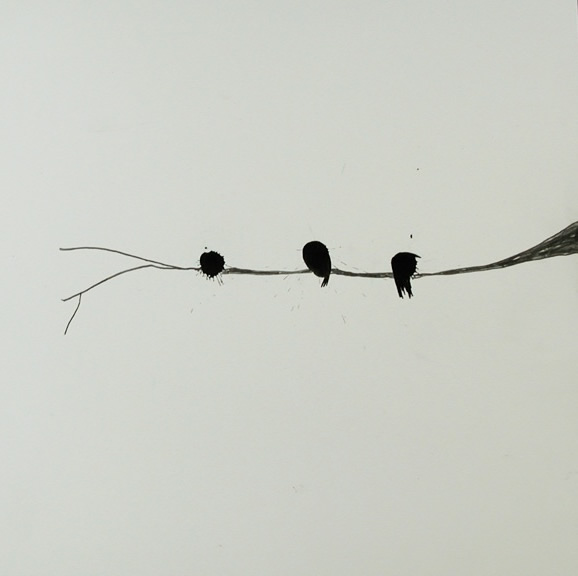 This piece came from an ongoing series of (mostly) pen and ink drawings inspired by crows. It is a piece that was part of an exhibition at Homewood in March 2011 called Some Crows. While a handful of the drawings in the show were more or less realistic depictions of crows in various states, over the course of drawing crows I became increasingly interested in how crows abstracted and were still recognizable as crows, and how they patterned, both in nature and in my representations of them. This particular piece is one of my early experiments with both abstraction and patterning. The crows in the piece are in a line, as they are in nature, but as they proceed up the branch they increasingly abstract. What I love about the abstraction in this case is that it also captures an essence of crows. Visually, in the air and on treetops, crows are marks and blobs, and smears of black. What’s wonderful is that because of their nature, the abstraction also mirrors the character and emotional quality of crows, so while it is abstract, it is also a tangible expression of the character of crows. In this piece the final crow on the left is virtually an explosion of ink. At once being an abstraction but also being an emotive expression of the crow. Technically many of the drawings in this show began with my fingers dipped in ink, making marks on paper in a spontaneous fashion. I would then sort through these automatic drawings once they dried and find ones that I thought were most suited to further work into finished drawings. This piece exemplifies that technique and the final crow of the left of the branch is the pure unadulterated gesture of finger dipped in ink touching paper. 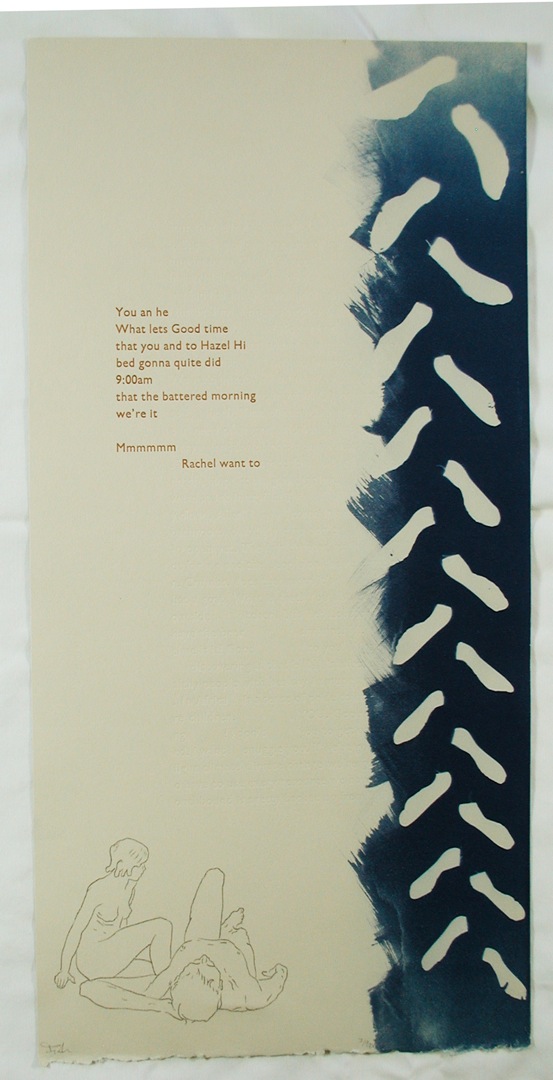 This print began as a daily practice in which I wrote down the first thing I heard said each day. When I began it was often from public radio, which was what I expected. But as my experiment progressed I also found myself falling in love and public radio was frequently replaced by the voice of my new lover. From the text I generated I extracted one word from each day by method of chance and this became a nonsensical poem which I feel clearly speaks of the act of falling in love. 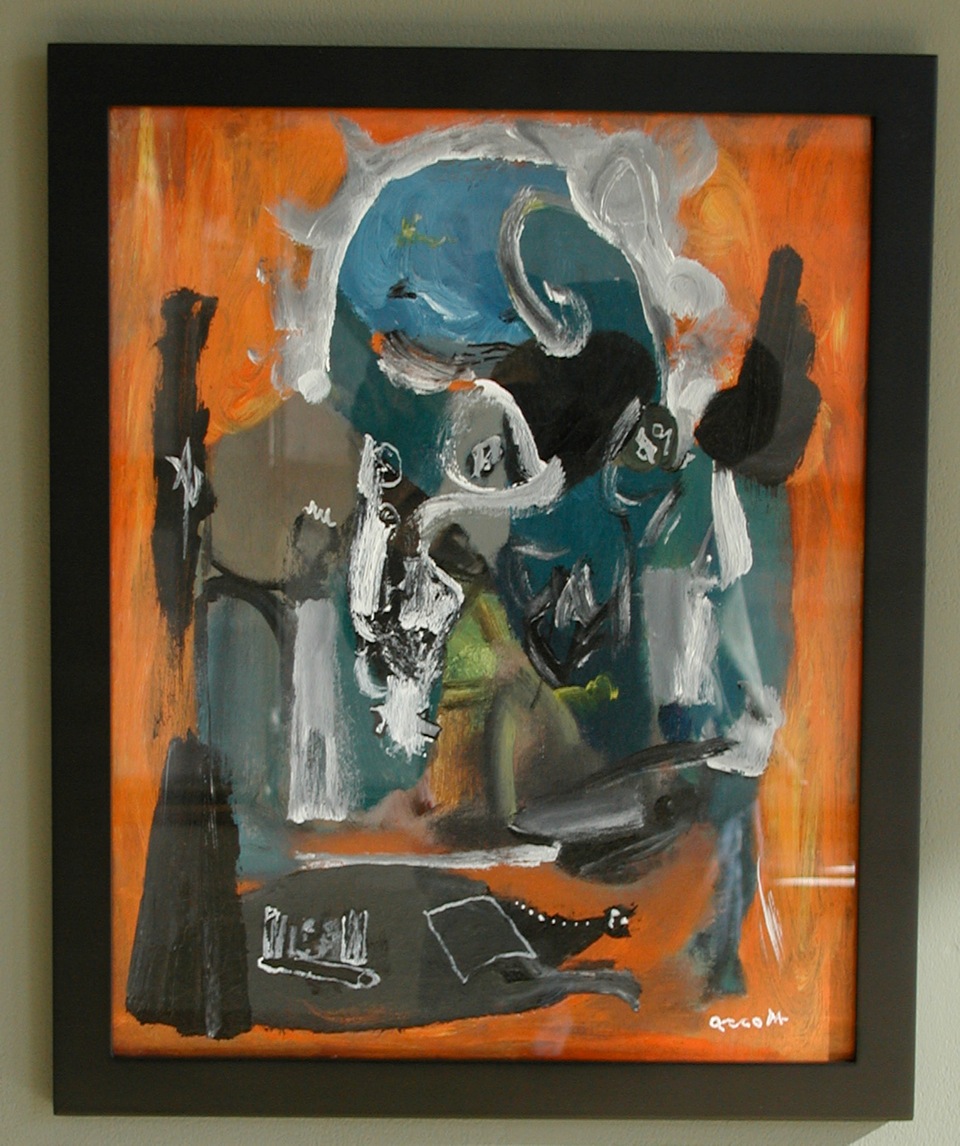 I painted Hidden Cross on my home easel. The way in which the piece was started pulled me further and further. Starting with black forms, I was able to create a depth. A deep surrounding orange gave an outside border and the inside gave a cross. The depth of the cross area and at the center a well with figure tells a story. Hidden Cross says a story. One by a block type cross. Two by a figure resting on a well in the painting’s center. My painting was a stepping stone. For me it expresses a dreamland in which the viewer can choose his or her story.