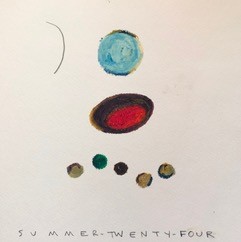 What is the crossroads where the imagery of painting and the imagery of poetry meet?  What happens when they do meet?  Neal and George set out to explore these questions in their new Homewood Studios Covid window show series Inside-Out.  Riffing off poems in George’s 2015 book of poetry, Tanka Year, Neal has begun selecting poems from the book and listening to what the poetry says to him about applying oil pastel and pencil to his pages.

(George)
While composing the poems in Tanka Year, I learned poetry lives all around us.  It is not something we need to go searching for as if it was hidden treasure or the solution to  a mathematical conundrum.  No need to ask, “What shall I write about?” or to say, “I believe I will write a poem about a winter storm.”   To simply slow down and listen, be attentive, to what is occurring around us and what is occurring inside us.  The poem is already there, waiting for me to give to it the language it deserves.  Watching Neal’s images show up one or two, sometimes five or six, in my in box, as he works to give color and shape to his response to the poems, has been a most satisfying aspect of our collaboration.

(Neal)
I have always loved the interplay between image and text. In my own work I’ve always been the author of both, so the “play” was easy and internal. Doing this same kind of play with someone else’s words was more difficult than I expected. My challenge was I did not want to just illustrate the tankas but for my pieces to be whole and complete in and of themselves but also for there to be visible connective tissue. This was a really interesting creative space to maintain especially since what George’s tankas conjure in my brain is so freaking visual and visible. One of my favorite genres in jazz is the duet. Not being especially musically skilled, this collaboration with George and his poems makes me feel like I’ve had a taste of being in a really sweet duet.

On Saturday, April 10th, from 1pm to 3pm, Neal and George will be outside the studio, available to meet and talk with anyone interested in the current window show.

On Thursday, April 22nd, beginning at 7pm, Neal and George will host a Zoom Artists’ Talk.

All of the nineteen original boards in the show are available for purchase at $75 each.  For questions about purchase, please contact George Roberts at george@homewoodstudios.com.

Trade copies of Tanka Year, the book from which the poems in the show were taken, are available for $15 a copy.  Inquire with George, george@homewoodstudios.com.